The beautiful northern lights are coming out! The fantastic northern lights season is from late August to late March, and you can get a chance of seeing the mesmerising lights with your own eyes. Join us on a northern lights tour between 25th of August and 31st of March every year!

Northern Lights Search
Come with us on a guided Northern Lights Hunt and go to the best spot available to see the lights! The tour is a self-drive tour with a guide, but since we will be driving an Arctic Truck, we can drive on mountain roads and get away from the hustle and bustle and away from another traffic. This tour gives the ultimate experience – complete darkness, out in the Icelandic wilderness. The small intimate tour makes it a journey that you will never forget! If you prefer  more action and multi-day adventures then check the Landmannalaugar & Northern Light Hunt out. 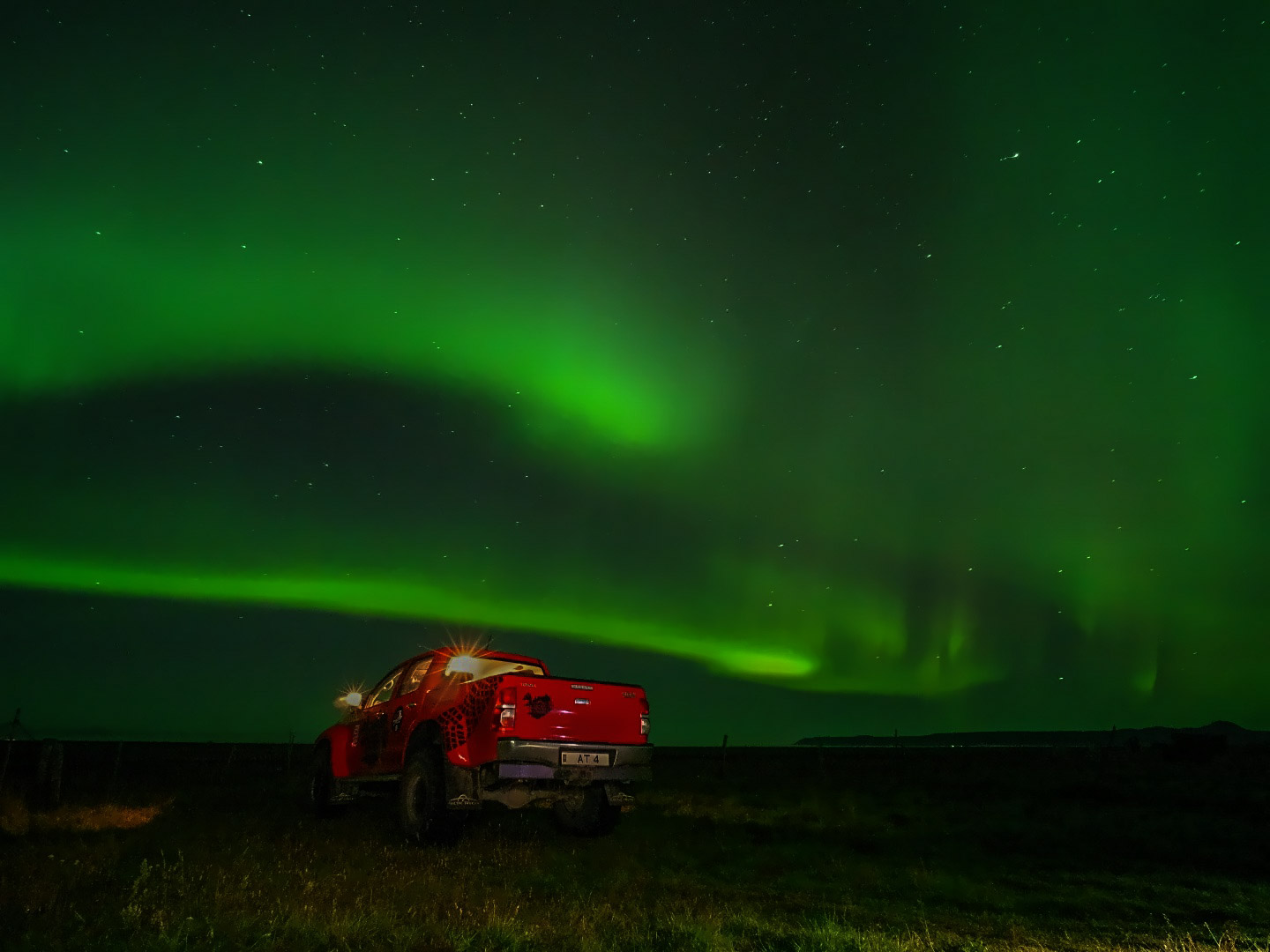 Go out on a hunt by yourself
Additionally, if you do not want a guided tour, you can rent a fully equipped Toyota Hilux AT38 from us and go on an adventure on your own. The Hilux has been used to drive in the Icelandic highlands for decades, and three AT38s were used in the British car show Top Gear when the team drove to the Northern Magnetic Pole in 2007. The whole trip was over 1400 kilometres on sea ice, boulder fields and small islands. The Hilux AT38 is a sturdy companion which will make your northern lights hunt even more fun.

Note the Arctic truck rental is only bookable until October 15th.

What are the northern lights?
The northern lights, which are a wholly natural phenomenon, are formed by charged solar particles hitting the Earth’s atmosphere after solar storms. So, the Sun affects the Earth not just during the day by giving everything life, but also during the night. However, because it is a natural phenomenon, we cannot guarantee that you will see them. If we could, we would be rich!
Does it have to be freezing for the northern lights to be visible?
No, that is not true. Many believe that the temperature needs to be below 0°C for people to see the northern lights. The reason for this belief is that the skies need to be (mostly) clear of clouds and dark for us to be able to see them. There is only darkness during the winter months in Iceland, and it is generally a bit colder when the skies are clear, so it is not that unreasonable people would believe this.
That also does not mean that there are no northern lights during the summer months, we just cannot see them because it is so bright! However, when it gets dark enough for us to see the stars in the sky, it is dark enough to see the northern lights!

What colours are the lights?
They can range from different shades of green, blue, purple, red and pink. They can even sometimes seem white! The colour depends on different particles colliding with the Earth’s atmosphere, where they land and how high or low in the atmosphere they are.
The lights also differ in intensity, depending on how strong and big the solar storms are.

This website uses cookies to improve your experience while you navigate through the website. Out of these, the cookies that are categorized as necessary are stored on your browser as they are essential for the working of basic functionalities of the website. We also use third-party cookies that help us analyze and understand how you use this website. These cookies will be stored in your browser only with your consent. You also have the option to opt-out of these cookies. But opting out of some of these cookies may affect your browsing experience.
Necessary Always Enabled

Any cookies that may not be particularly necessary for the website to function and is used specifically to collect user personal data via analytics, ads, other embedded contents are termed as non-necessary cookies. It is mandatory to procure user consent prior to running these cookies on your website.